King of Scots Robert the Bruce Society are a registered charity which survives solely on the kindness of your donations. Please help us continue our work by making a TEXT donation using the information below.

Once again, THANK-YOU for your kindness & support

Become a member of our proud society
MORE INFO...

The Bruce family have brought together the Strathleven Artizans and Historic Scotland to build a replica of the Great Throne due to be unveiled in time for the 707th anniversary of Bruceâs coronation, on 25 March and will be one of a number of projects to mark the 700th anniversary of the Battle of Bannockburn in 2014. Read more...

There was a delay in the new Heritage Centre due to a change of premises, which turned out to be for the best. On November 11th 2013 the Strathleven Artizans commenced the conversion of our new premises for a bigger and better King Robert the Bruce Heritage Centre. The original Heritage Centre is still open to visitors.
We welcome all voluntary support from all friends of the Heritage Centre around the world

It is quite easy to find us in the village of Renton, read more...

When new centre is completed in 2014, the centre will accomodate the visit of school children and visitors from all over Scotland and beyond.

Medieval clothing and weapons will be available for that special hands-on experience, with talks and in-house situations from the King and the Royal house being played out in making a real life visit to Robert the Bruce Heritage Centre a memorable one.

Childen are encouraged to 'dress in Medieval costume' to mark the occasion.

In the meantime why not come visit us in the original Robert the Bruce Heritage Centre.

Our Artifacts and Attractions

At the centre of our artifacts and attractions is the 'Royal Throne' made from the heart of the Bruce Oak (see the Startleven Artizans page on the Bruce Oak) adorned with a replica wooden carving of the Bruce's Great Seal of Scotland.

The Robert the Bruce Heritage Centre, on the 7th March 2013, was presented with a spectacular reproduction of the 'Declaration of Arbroath' by the Glasgow artist Paul Shergold.

There is a great collection of swords, sheilds and armour, some of which can be tried on. The centre peice of our sword collection is our 700th anniversary of Bannockburn sword commisioned especially for the occasion and forged in the fires of master sword maker Paul McDonald (see the Startleven Artizans news page on the Artizans 700th Anniversary of Bannockburn Sword)

The Robert the Bruce Heritage Centre has created an educational opportunity for school classes to dress up in medieval costumes, armour and helmets while learning about the history of Scotlandâs greatest warrior king. 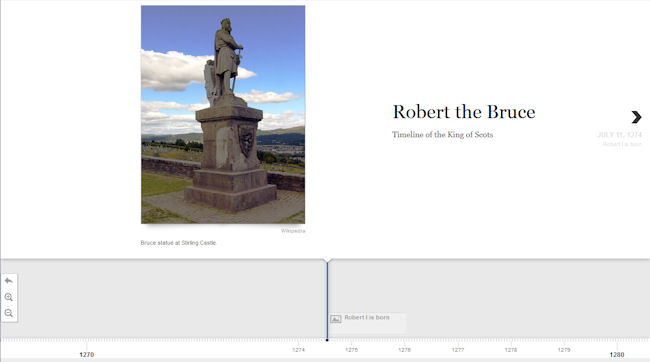 Having Renton and the local area recognised as being an important part of Robert the Bruce's life has always been a long standing dream of Duncan Thomson. Duncan and a few friends friends with similar interests in local Scottish history got together, and formed the Strathleven Artizans.

At that time the newly formed Strathleven Artizans were working out of their small workshop in Renton, creating historical replica swords, etc and promoting the life of Bruce in the local area, with the hope of one day opening a permanent heritage centre in the memory of Bruce.

Finally an opportunity arose with First Scotrail when they put a number of their small local stations up for adoption in their Adopt a Station Scheme. The Renton Station was leased to the Strathleven Artizans for the commencement of their plans for a Robert the Bruce Heritage Centre.

On Monday the 6th December 2010 Scotrail awarded the Robert the Bruce Heritage Centre Winner's of the Best Adopted Station 2010. 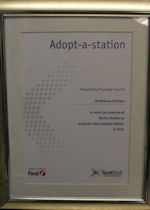 The station at Renton was the opportunity the Strathleven Artizans needed to keep them on track, excuse the pun, for a dedicated centre and as interest grew they were asked to attend more and more schools to give talks on this period of Scottish history as well as host classes of school children at the Heritage Centre.

The Strathleven Artizans are growing from strength to strength and are now looking towards a larger premises so that they can expand the work they have done so far and become a centre of knowledge of the life of Bruce and specifically Renton where he spent his final years. The Renton Station will not just be forgotten as the Strathleven Artizans are extremely grateful to Soctrail for their assistance in the start of the Heritage Centre, the station will become a annex of the new Heritage Centre to expand the facilities that assist schools in giving our chidren a better education in our history and culture.

How to find us